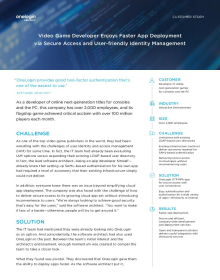 OneLogin provides good two-factor authentication that’s one of the easiest to use.

As a developer of online next-generation titles for consoles and the PC, this company has over 2,000 employees, and its flagship game achieved critical acclaim with over 100 million players each month.

Challenge
As one of the top video game publishers in the world, they had been wrestling with the challenges of user identity and access management (IAM) for some time. In fact, the IT team had already been evaluating IAM options versus expanding their existing LDAP-based user directory. In fact, the lead software architect—being an app developer himself— already knew that setting up SAML-based authentication for his own app had required a level of autonomy that their existing infrastructure simply could not deliver.

In addition, everyone knew there was an issue beyond simplifying cloud app deployment. The company was also faced with the challenge of how to deliver secure access to its growing cloud app set without introducing inconvenience to users. “We’re always looking to achieve good security that’s easy for the users,” said the software architect. “You want to make it less of a hassle—otherwise, people will try to get around it.”

Solution
The IT team had mentioned they were already looking into OneLogin as an option. And coincidentally, the software architect had also used OneLogin in the past. Between the team’s initial interest and the architect’s endorsement, enough momentum was created to compel the team to take a closer look.

What they found was pivotal. They discovered that OneLogin gave them the ability to deploy apps faster. As the software architect put it, “We need to have authentication and authorization information that’s easy for anybody to manage, one that works with all different kinds of apps— third party or internal. And, we need to rely on one system as the single source of truth. OneLogin fits in that picture pretty well, especially for the third party apps.”

As well, the team leveraged OneLogin’s One-time Password (OTP) app to add secure, multi-factor authentication (MFA) access without compromising user convenience. The software architect was quick to point out that “OneLogin provides good two-factor authentication that’s one of the easiest to use. I really like the way you have that push on the app.”

Results
As a technology-driven company, most of the game company’s workforce is capable of developing and deploying their own services. OneLogin made it possible for anyone within the organization to do so in a secure and efficient manner—a benefit that paved the way to allow them to deploy apps faster than ever before. “It’s a newer generation of looking at infrastructure services like that, making things much more self-service and able to delegate enough authorization to individual teams so that they can get their work done,” commented the software architect. Using OneLogin, he was able to successfully deploy the tools he needed, and meanwhile, the IT team was able to expand it to their entire cloud app set.

Beyond increasing app deployment speed and meeting the immediate needs of the business, the game developer’s selection of OneLogin also ensured something else. It allowed the company to utilize a solution that was aligned with a core philosophy of the company—that services should be open and transparent in nature.

This alignment was reflected in a comment the software architect made in regards to all software vendors, “It’s a problem any time you’re locked into a particular vendor solution because they’re effectively holding your data hostage. And although it’s fine to have an on-premise solution as long as the data and the protocols it supports are open source and open standards... going with a cloud service is especially useful when you’re wanting to integrate with third party services. Because you need something on the outside that you can expose and make available to the third party.”

About OneLogin, Inc
OneLogin brings speed and integrity to the modern enterprise with an award-winning single sign-on and identity management platform. Our portfolio of solutions secure connections across all users, all devices and every application, helping enterprises drive new levels of business integrity and operational velocity across their entire app portfolios.