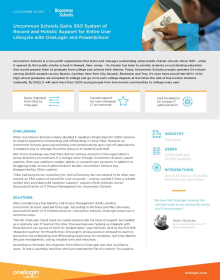 Today, Uncommon Schools proudly operates 54 schools serving 20,000 students across Boston, Camden, New York City, Newark, Rochester and Troy. It’s even more proud that 90%+ of its high school graduates are accepted to college and go on to earn college degrees at five times the rate of low-income students nationally. By 2022, it will send more than 1,000 young people from low-income communities to college every year.

Part of the challenge was that Okta did not natively connect to the organization’s Active Directory environment. If a change came through Uncommon Schools’ parent systems, Okta was unable to update, delete, or suspend user accounts. In addition to struggling under so much administration burden, Uncommon Schools was disappointed by Okta’s uptime.

“Okta had become our repository for Active Directory but we wanted it the other way around: an SSO system of record for user accounts -- and we wanted it from a reliable vendor who provided solid customer support,” explains Malik Nicholas, Senior Associate Director of IT Project Management for Uncommon Schools.

After considering a few Identity and Access Management (IAM) vendors, Uncommon Schools selected OneLogin. According to Nicholas and Marc Devinsky, Associate Director of IT Infrastructure for Uncommon Schools, OneLogin stood out in numerous ways.

“We felt OneLogin could meet our needs and provide the level of support we needed as a relatively lean IT team at the time. One example was helping us integrate with PowerSchool, our source of truth for student data,” says Nicholas. And as the first IAM integration partner for PowerSchool, OneLogin’s unique position allowed his team to streamline the onboarding and offboarding experience for complete, real-time identity lifecycle management, saving valuable time and resources.

According to Nicholas, the migration from Okta to OneLogin was also invisible to users. “It was a seamless transition that just required the flip of a switch,” he explains.

Today, Uncommon Schools has enabled 14 production applications and 6 test/development applications in OneLogin. Once they complete their staff and student workflows, new and updated student data in PowerSchool will be automatically updated in OneLogin and fed into downstream systems. While staff data is currently being pulled from ADP into OneLogin using a Tray.io API call, going forward, Workday will be the source of truth for staff data.

When it comes to creating new accounts in its Active Directory environment, Uncommon Schools relies on Mindshift. In those cases, OneLogin pushes updates to Mindshift, which in turn scripts the Active Directory changes.

In this and other ways, OneLogin enables the flexibility that Uncommon Schools needs. According to Nicholas, “We’re constantly challenging the status quo – it’s what makes us ‘uncommon’. To that end, OneLogin enables us to make decisions about the future of our directory services – a choice we didn’t have when using Okta.”

“As we work remotely, IT management has taken on new significance and become a bigger part of our operations. OneLogin has been a reliable partner, pivoting with us as we’ve made all our requests,” concludes Devinsky.