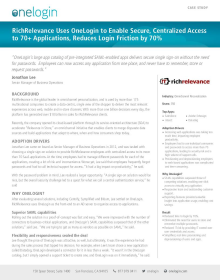 OneLogin’s large app catalog of pre-integrated SAML-enabled apps delivers secure single sign-on without the need for passwords. Employees can now access any application from one place, and never have to remember, store or request passwords.

Recently, RichRelevance opened its cloud-based platform through its service-oriented architecture (SOA) to accelerate “Relevance in Store,” an omnichannel initiative that enables clients to merge disparate data sources and build applications that adapt to where, when and how consumers shop today.

Adoption Drivers
Jonathan Lee came on board as Senior Manager of Business Operations in 2012, and was tasked with choosing a single sign-on solution to provide RichRelevance employees with centralized access to its more than 70 SaaS applications. At the time, employees had to manage different passwords for each of the applications, creating a lot of risk and inconvenience. Worse yet, Lee said that employees frequently forgot passwords and had to call technical support for access. “It had a big impact on productivity,” he said.

With the password problem in mind, Lee realized a larger opportunity. “A single sign-on solution would be nice, but the overall security challenge led to a quest for what we call a central authentication service,” he said

About RichRelevance
RichRelevance is the global leader in omnichannel personalization, and is used by more than 175 multinational companies to create a data-centric, single view of the shopper to deliver the most relevant experiences across web, mobile and in-store channels. With more than one billion decisions every day, the platform has generated over $10 billion in sales for RichRelevance clients.

Why OneLogin?
After evaluating several solutions, including Centrify, Symplified and Bitium, Lee settled on OneLogin. RichRelevance uses OneLogin as the front-end to an AD server to organize access to applications.

Superior SAML capabilities
Rolling out the solution in a proof-of-concept was fast and easy. “We were impressed with the number of connectors to business-critical applications, and OneLogin’s SAML capabilities surpassed that of the other solutions,” said Lee. “We are trying to get as many as vendors as possible on SAML,” he said.

Flexibility and responsiveness sealed the deal
Lee thought the price of OneLogin was attractive, as well, but ultimately, it was the experience he had during the sales process that tipped his decision. For example, when Lee’s team chose a new application called Datadog, OneLogin developed a connector for it in less than a week. “It wasn’t in the OneLogin catalog, but I simply opened a support ticket to create one, and OneLogin was on it immediately,” he said.

A better handle on usage and provisioning
Another benefit of OneLogin is visibility. The solution provides insight into application usage, which helps Lee keep licensing under control. “I can see what people are actually using and what they’re not,” he said. “Basically, I just generate an activity report from within OneLogin that shows how often a user accessed each application. In this way, I’m able to determine if I’m paying for seats that aren’t really needed, and trim spending accordingly.” Lee said that OneLogin helps him map out entitlements and ensure that unintended users are not provisioned for applications they don’t need.

RESULTS
OneLogin boosts end-user app access productivity by 70%
RichRelevance has noticed significant productivity gains since implementing OneLogin. Prior to the rollout, employees were spending 15 minutes or more per day trying to log in to various applications, having to reset passwords, contacting the helpdesk and other related activities.

“Since implementing OneLogin, we’ve been able to lock down access to applications like Salesforce and our financial accounting system, Intacct,” he said. “OneLogin enables us to secure those critical applications and eliminates the need for passwords.”

Having all applications in one place, accessible through single sign-on, cuts that time by at least 70 percent, freeing up staff to focus on more important tasks.

Insight into application usage helps control costs, optimizes SaaS seat utilization
Lee said OneLogin has been extremely helpful in controlling software costs company-wide. Using OneLogin’s reporting tools, he has more insight into who is using what software, and can eliminate software seats where they’re not necessary.

“The licenses for Salesforce are expensive,” he said. “We are able to leverage reporting tools within the system to obtain a clear picture of who is using which applications, so we can reign in budgets and make sure software isn’t deployed to employees who aren’t using it,” said Lee.

One-click deprovisioning reduces risk
OneLogin simplifies provisioning and deprovisioning, so that if an employee leaves the company, IT can disable access to all applications immediately, reducing risk.

“We simply place the user in the Deactivated Group in AD, and it removes them from key applications in one click,” said Lee. “It automatically places them in a suspended state for all of the systems. Not only does this make our job easier, it improves security.”

Elimination of passwords is a clear benefit
Lee said the biggest benefit for RichRelevance was the elimination of multiple, unsecured passwords. Being able to access all applications through the OneLogin portal makes access fast and easy for employees, reducing support calls and security risk.

“OneLogin’s large app catalog of pre-integrated SAML-enabled apps delivers secure single sign-on without the need for passwords, so employees can access any application from one place, and never have to remember, store or request passwords,” said Lee.