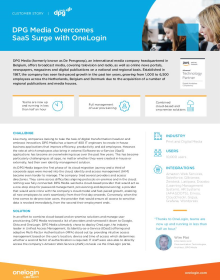 Thanks to OneLogin, teams are now up and running in less than half an hour.

DPG Media (formerly known as De Persgroep), an international media company headquartered in Belgium, offers broadcast media, covering television and radio, as well as online news portals, newspapers, magazines and digital publications on a national and regional basis. Established in 1987, the company has seen fast-paced growth in the past ten years, growing from 1,000 to 6,500 employees across the Netherlands, Belgium and Denmark due to the acquisition of a number of regional publications and media houses.

Challenges
Like many companies looking to take the task of digital transformation head-on and embrace innovation, DPG Media has a team of 400 IT engineers to create in-house business applications that improve efficiency, productivity and aid employees. However, the rate at which employees also bring in external Software-as-a-Service (SaaS) applications has become an overwhelming issue over the past few years. This has become particularly challenging as all apps, no matter whether they were created in-house or externally, had their own identity management solution.

As DPG Media began the first phase of its cloud migration journey and a third of corporate apps were moved into the cloud, identity and access management (IAM) became even harder to manage. The company tried several providers and access directories. They came across difficulties aligning protocols on-premise and in the cloud; nothing was fully connected. DPG Media wanted a cloud-based provider that would act as a one-stop shop for password management, provisioning and deprovisioning; a provider that would work inline with the company’s cloud model and fast-paced growth, enabling all new employees to work seamlessly from their first day onwards. Conversely, when the time comes to de-provision users, the provider that would ensure all access to sensitive data is revoked immediately, from the second their employment ends.

Solution
In an effort to combine cloud-based and on-premise solutions and manage user provisioning, DPG Media reviewed a list of providers and narrowed it down to Google, Okta and OneLogin.

DPG Media ultimately chose to deploy OneLogin, the industry leader in Unified Access Management. Its Identity-as-a-Service (IDaaS) offering and adaptive Multi-Factor Authentication (MFA) stood out by providing intuitive access management based on the user’s location, device and time of access which determines whether a second factor of authentication is required. IT staff were also able to directly access the company’s Amazon Web Service (AWS) console via the OneLogin portal. DPG Media had a long list of potential providers and chose to work with OneLogin, not only due to the company’s diverse offering, the self-sufficient nature of the product with its low maintenance requirements and overhead, but mostly because of the OneLogin staff and their expertise. “OneLogin is a company that we see ourselves having a good partnership with. The way the company works and the people that we work with directly felt most like our own DNA, compared to the competitors we were considering,” said Wim Plat, Information and Communication Technologies Architect at DPG Media.

Results
“Thanks to OneLogin, teams are now up and running in less than half an hour,” added Plat. One of DPG’s biggest challenges for implementation was managing a team of 400 IT engineers who use 40+ AWS accounts in their own environments and seamlessly migrating the authentication into these accounts to OneLogin, but the transition was a success.

“Once our cloud migration journey is complete, all of our corporate and SaaS applications will be completely aligned in one environment and managed through OneLogin’s portal and one identity, taking the headache out of what was once a complex environment of applications and conflicting account and password policies,” stated Wim Plat.