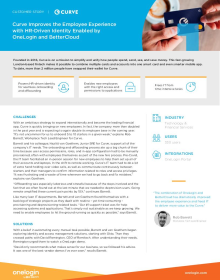 We look forward to integrating OneLogin, BetterCloud, and Jamf solutions to further automate onboarding and offboarding processes and increase security. For example, we’ll be able to create a workflow between the three products to automatically lock user access to their work laptop and applications during offboarding.

Founded in 2016, Curve is on a mission to simplify and unify how people spend, send, see, and save money. This fast-growing London-based fintech makes it possible to combine multiple cards and accounts into one smart card and even smarter mobile app. To date, more than 2 million people have swapped their wallet for Curve.

With an ambitious strategy to expand internationally and become the leading financial app, Curve is quickly bringing on new employees. In fact, the company more than doubled in the past year and is expecting to again double its employee base in the coming year. “It’s not uncommon for us to onboard 5 to 10 starters in a given week,” explains Rob Barrett, Workplace Tech Lead Engineer for Curve.

Barrett and his colleague, Hazlitt van Goethem, Junior SRE for Curve, support all of the company’s IT needs. The onboarding and offboarding process ate up a big chunk of their time because user access permissions, roles, and in-app configuration had to be manually provisioned, often with employees themselves as part of the new hire process. Pre-Covid, the IT team facilitated an in-person session for new employees to help them set up all of their accounts and laptops. In the shift to remote working, Curve’s IT team had to do a lot of extra hand-holding over video calls, as well as communicate continuously between starters and their managers to confirm information related to roles and access privileges. “It was frustrating and a waste of time whenever we had to go back and fix mistakes,” explains van Goethem.

“Offboarding was especially laborious and stressful because of the steps involved and the fact that we often found out at the last minute that we needed to deprovision users. Going remote amplified these current pain points by 10X,” continues Barrett.

Like many lean IT departments, Barrett and van Goethem found themselves with a backlog of strategic projects as they dealt with routine – yet time-consuming – provisioning and deprovisioning-related tasks. “Our #1 support ticket was for help accessing systems and applications. That’s simply not sustainable as we keep growing. We need to enable employees to hit the ground running as quickly as possible,” says Barrett.

With a belief in automating every manual task possible, Barrett and van Goethem began exploring identity and access management solutions, starting with Okta. Then they crossed paths with David Remington, CEO of Remitech. After understanding their needs, Remington urged them to watch a OneLogin demo.

“David only recommends what makes sense for our business, so we followed his advice. It was one of the best vendor demos I’ve ever seen,” recalls Barrett.

OneLogin’s features included ease of use, out-of-the-box integrations with Curve’s existing systems, including numerous cloud apps for single-sign-on and role-based access control, HR-Driven integration with Hibob, and extensibility, such as an API for other teams to build custom connectors and integrate access management with their own tools as needed.

At the same time, BetterCloud’s features included management of SaaS applications, in-app workflows, and granular visibility into user behavior, such as file-sharing. According to van Goethem, “BetterCloud’s UI and workflows are well organized. The structure makes it quick and easy to plan and build effective workflows, supported by useful visuals. BetterCloud also offers more granular alerting than what is offered through specific apps, such as being able to audit file security.

Once the team learned of the integration between OneLogin and BetterCloud, Barrett and van Goethem were sold. “We loved the workflow and security enabled by BetterCloud, and we were impressed with the granular provisioning and deprovisioning capabilities offered by integrating the two platforms together. The platforms complement each other, so we know one or the other can make something happen, and together we’re getting more overall automation, flexibility, and options for how we want to set up workflows to fit our organization’s needs,” says van Goethem.

Barrett and van Goethem first implemented BetterCloud to immediately improve the onboarding experience for starters by ensuring they were part of the workflow. Though they did not use it with the initial implementation, the IT team loved the BetterCloud Discover module that helps them see what apps users are using. “It gives us visibility into which apps people are truly using, so we can prioritize instead of guess,” explains van Goethem.

Curve then implemented OneLogin integrations and various internal and external cloud-based apps, such as SAML SSO or forms-based authentication. Explains van Goethem, “Every login goes through OneLogin and it integrates seamlessly with the majority of our applications, as well as with Hibob for HR-Driven identity provisioning.”

With OneLogin in place, users are automatically provisioned and given access to relevant apps, once Curve’s HR department creates new user accounts in Hibob, which kicks off the role-based access workflow. BetterCloud leverages OneLogin to kickoff enhanced, in-app workflows, such as provisioning users into specific Slack groups/channels and notifying IT when someone joins or leaves the company.

“Onboarding used to take 15 minutes per person. Now it happens in one or two minutes automatically. Now that 99% of onboarding or offboarding is done through OneLogin and BetterCloud, all we have to do is a quick sanity check for any alerts during the process,” says Barrett.

Automated provisioning also means users can get up and running without IT’s assistance. “We’re a team in London, so automated onboarding means no more crazy hours helping starters in other time zones and a better employee experience,” adds van Goethem.

With Hibob as the company’s single source of truth about employees, IT isn’t a blocker. “HR knows when someone’s status is changing and will update Hibob with that information, like a role change or new title. Now, we get notified and just need to quickly check that all the corresponding system changes have happened automatically,” Barrett explains. ""Now when I wake up, I know that 99% of [onboading or offboarding] is done. All we have to do is a quick sanity check."

Curve has connected the majority of their applications with OneLogin and BetterCloud. Curve manages and secures several apps, such as G-Suite, Slack, and Spoke, via BetterCloud’s modules, including Google Workspace. OneLogin provides authentication for the majority of Curve’s  apps – both form-based and SAML configurations, and the integration between BetterCloud and OneLogin provides a better overall view of the company’s app landscape. “Seeing the same information appear in both tools is a confidence booster. We also gain visibility and control over our apps and users from multiple angles,” says van Goethem.

“Plus, the alerting is more granular and effective, enabling a holistic approach that gives a view into multiple factors. And it’s not coming via email where we can miss things. Now we can react quickly,” says Barrett.

Moreover, the IT team is now confident that employees are offboarded on their final day with the company. “We don’t have to scramble to deprovision anyone with last-minute notice. It all happens automatically as soon as HR indicates they are no longer an employee. In fact, offboarding happens about ten times faster than in the past with OneLogin and BetterCloud,” says Barrett.

With the BetterCloud Discover module, Curve has also saved time auditing its applications and employee access. “What took me a full day now happens automatically, so I just see the results,” says van Goethem.

According to Barrett, the BetterCloud audit makes him feel more confident in the company’s security. “It’s easy to think you’re secure with your file security so it’s useful to see how files and links are being shared. Plus, all the automation enabled by OneLogin and BetterCloud has freed us to focus on strategic projects that help improve the everyday employee experience.”