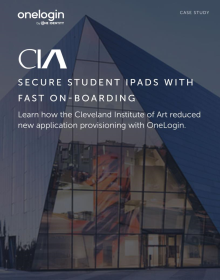 OneLogin is a unique product that is less expensive than other single-sign on products and offers for a much more seamless integration to third party technologies like Google Apps. The customer service and personal attention allowed for us to launch against an aggressive deadline and continues to offer us ongoing ﬂexibility.

Six weeks before the start of the 2011 school year, the CIA technology team received approval to move ahead with the Digital Canvas Initiative (DCI), which aims to promote student-teacher collaboration by providing iPads to all faculty members and incoming freshmen. To execute a seamless launch, CIA enlisted OneLogin to provide Google Apps access across workstations, laptops and iPads. OneLogin completed the deployment in less than three weeks.

Adoption Drivers
CIA was using another product to manage passwords, and each change or issue had to be resolved through a different service. This was costing the team considerable time and effort. Additionally, the new initiative called for providing all incoming Freshmen with Apple iPads, which would require configuring hundreds of devices with access to individual email accounts and other applications. Updating those iPads device by device would be costly.

“Originally, we were looking at Google Apps implementation providers who install technology that allows pass-through of Active Directory passwords into the Google ecosystem,” said Kimmel. “These solutions were expensive, however. Most Google Apps implementers were charging $3000-4000 just for the password integration piece.”

Kimmel stumbled upon OneLogin’s single-sign on solution, which could be used not only with Google Apps, but with 2,200+ SaaS applications. “It just made sense to use OneLogin for everything,” said Kimmel.

Why OneLogin?
An initial pilot roll-out to non-tech users—mostly staff and maintenance crews— was extremely successful, proving that OneLogin could have the widest adoption. “With OneLogin, the non-tech users just go to one place and sign in with their email for access to all the apps they need,” said Kimmel.

iPad app streamlines device provisioning to incoming Freshmen
Using OneLogin, CIA deployed iPads for new freshman in a single night. All of the iPads were pre-configured with each student’s personal email. The cumbersome login process the school formerly used was replaced by single sign-on, and students were able to immediately access their email – with little involvement from CIA’s IT team— and all in just 90 minutes. With the OneLogin iPad app, CIA simply manages user access, instead of having to keep track of students’ individual iPads. All the students’ personal apps and data remain private.

“The connectivity between OneLogin and Google was great,” said Kimmel. “Literally, we turned it on over the weekend, created the accounts and provisioned the iPads. It was that easy.”

More for less
Kimmel believes he got more for his investment by choosing OneLogin’s solution. “OneLogin’s fees were comparable, but we have so much more functionality,” he said. “We came out with a product that has infinitely more flexibility than what we would have gotten with just the password piece.”

For example, one of the solutions Kimmel looked at required a daily sync and separate server for authentication. “If we wanted to create a new account, we would have to add to the text file and create or delete users,” he said. “By choosing OneLogin, we got rid of those inelegant processes and added password sync. Now we can easily add other apps, like Schoology and Replicon—products that would have had a unique sign-on and password requirement, and it’s all consolidated onto a single login screen.”