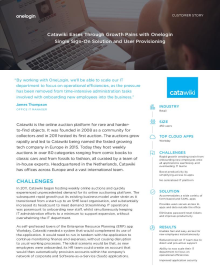 By working with OneLogin, we’ll be able to scale our IT department to focus on operational efficiencies, as the pressure has been removed from time-intensive administration tasks involved with onboarding new employees into the business.

Catawiki is the online auction platform for rare and harder-to-find objects. It was founded in 2008 as a community for collectors and in 2011 hosted its first auction. The auctions grew rapidly and led to Catawiki being named the fasted growing tech company in Europe in 2015. Today they host weekly auctions in over 80 categories ranging from comic books to classic cars and from fossils to fashion, all curated by a team of in-house experts. Headquartered in the Netherlands, Catawiki has offices across Europe and a vast international team.

Challenges
In 2011, Catawiki began hosting weekly online auctions and quickly experienced unprecedented demand for its online auctioning platform. The subsequent rapid growth put its existing business model under strain as it transitioned from a start-up to an SME level organisation, and substantially increased its headcount to meet demand. Streamlining IT operations was paramount to onboarding new staff, whilst simultaneously keeping IT administration efforts to a minimum to support expansion, without overwhelming the IT department.

As self-professed lovers of the Enterprise Resource Planning (ERP) app Workday, Catawiki needed a system that would complement its use of the application. It would need to run in tandem with the application to continue monitoring finance and expenses, without causing disruption to usual working processes. The ideal scenario would be that, as new employees were onboarded, its HR team could create an account that would then automatically provision accounts within the company’s network of corporate and Software-as-a-Service (SaaS) applications.

Having no centralised IT platform within the company also presented a problem for the team. Fundamentally, the IT staff did not have an easy way to see which of the applications employees were using at work, as well as detailed information about how they were being used. Roughly 70 different SaaS tools were in operation within the company—many of which were dormant—causing unnecessary overheads that were impacting Catawiki’s business growth trajectory.

Catawiki was also presented with a challenge when employees left the company. The IT department faced the time-consuming task of manually de-provisioning employees from various accounts. So, the company needed to gain control via one main portal where they could confidently and efficiently deprovision ex-employees, as soon as they leave, from all applications—SaaS or company owned.

Solution
The company’s IT department sought an Identity and Access Management (IAM) solutions provider that placed simplicity at the forefront, was compatible with its existing cloud applications, and prioritised the security of company data.

Catawiki chose to deploy OneLogin’s unlimited platinum package including single sign-on, multiple-factor authentication, user provisioning and directory integration. Above all else, the package fit into the company’s larger strategy to simplify and make IT systems user-friendly for employees, and was compatible with the main ERP system, Workday.

Results
Catawiki saw instant results in one of its most problematic areas: onboarding new staff. OneLogin’s user-directory enabled new employees to have instant access to their vital work applications. James Thompson, Office IT Manager at Catawiki said, “OneLogin has streamlined our entire onboarding process. New users are simply sent a welcome email to say they have a OneLogin account, and have access to Google Mail and other corporate apps automatically.

“As we continue to add more apps and provision users based on their job titles and responsibilities, we’ll enjoy more consistency across the board. Previously, we’d have a scenario where people in the same team had access to different mail groups in apps, because we relied on manual administration. But now we can be confident that once someone joins the company, OneLogin mappings will auto-provision them in the correct mail groups.”

The IT team also experienced the unexpected perk of how OneLogin could improve the company’s IT support process. Rather than go through multiple support channels when a technical issue arose, employees can now get instant support through the OneLogin portal.

“Moving forward, by working with OneLogin we’ll be able to scale our IT department to focus on operational efficiencies, as the pressure has been removed from time-intensive administration tasks involved with onboarding new employees into the business. This will be vitally important to us as the business grows further, and will keep us safe in the knowledge that sensitive corporate data will remain protected and compliant with upcoming regulations.”

About Catawiki
Catawiki is Europe’s fastest growing online auction platform for rare and harder-to-find objects. Auctions are held every week in over 80 categories including art, antiques, collectables, watches, jewellery, classic cars and more. What makes Catawiki unique? Every auction is curated by a team of in-house experts. This ensures a varied and high-quality selection of lots every week.

Catawiki was founded in 2008 as a community for collectors, and has since grown into one of Europe’s largest online destinations for buying and selling special objects. In 2015 the auction platform was named the fastest growing technology company in Europe and today they see more than 50,000 special objects every week and 14 million visitors every month. Some of the top lots sold on Catawiki include a T-rex jaw, a hat worn by Michael Jackson and a lock of hair from Napoleon along with many rare collectibles and artworks. There’s something available to suit everyone’s passion. Find the object you love, and Catawiki will take care of the rest!