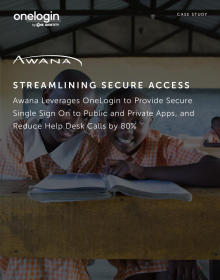 OneLogin is unique in the marketplace. Tight security controls yet with a really clean interface. Easy on the eyes. Easy to navigate. And a 100% reliable service.

As an evangelical non-profit organization, Awana desperately needs to stretch every dollar it receives. So when the Illinois-based organization began adding low-cost cloud applications to its IT environment for its 700 missionaries to access anytime, anywhere, Awana’s director of information services Michael Litz knew that a standard password management system wouldn’t do.

“We put any application we can in the cloud so it had become really difficult to be able to keep track of all of our employees’ different logins and password requirements,” recalls Litz.

For starters, Awana’s entire IT department is a two-man crew, responsible for fielding hundreds of requests per month. Taking time out to research and resend logins and passwords was significantly impacting productivity. At the same time, onboarding new cloud applications such as Salesforce, Box and Intacct ERP required building out each system with passwords for each of the organization’s 700 missionaries – a time-consuming and mind-numbing endeavor.

Adoption Drivers
Awana previously relied on a single sign-on solution but security concerns, problems synchronizing with Active Directory and limited functionality prompted the organization to rethink its approach. Intent on achieving safe and simple access to its cloud-based apps, Awana turned to OneLogin for its single sign-on solution.

Awana uses OneLogin’s pre-integrations for public apps and its SAML Toolkits and APIs to add single sign-on capabilities to internal custom built applications. Rather than log in to each application independently using different IDs and passwords, Awana’s missionaries now sign in once to multiple apps by clicking a an app icon within the OneLogin portal.

Why OneLogin?
Because OneLogin supports Active Directory, Awana can instantly authenticate users on a new cloud application in one fell swoop rather than have to build out an entire system. “Each time we add an internal application, we don’t have to set people’s passwords,” says Litz. “The system syncs it for them so employees can simply log into the system the same way they do every morning.”

Other features that influenced Awana’s decision to select OneLogin include:

Simple Implementation: By creating an easy path to identity management in the cloud, Awana was able to avoid costly investments in infrastructure and a lengthy deployment period. In fact, Awana was up and running with OneLogin in less than two months.

Easy Administration: With a couple of clicks, Awana can easily add new internal apps to the system without the need for sophisticated configuration.

Knowledgeable Support Team: Awana’s two-person IT team is guaranteed a fast response to its queries thanks to OneLogin’s HELP button which provides instant access to customer support, eliminating the need to fill out support tickets.

Easy-on-the-eyes Interface: A clean and simple interface helps Awana boost its control over web application access in the cloud and behind the firewall.