1. Your customers are demanding it. You WILL lose business (and the most lucrative business) if you don’t support SSO.

For many companies, SSO (Single Sign-On) and MFA (Multifactor Authentication) have gone from being “nice extras” to “must-haves.” If you haven’t already lost business because your application doesn’t support these features, chances are good that you soon will.

In many regulated industries such as healthcare and legal, Identity Management and SSO are mandated and other industries such as high tech that place a high value on efficiency and business integrity, simply won’t use a product that doesn’t support SAML. Doug Meier, the director of security and compliance at Oakland-based Pandora says, “Identity management SSO is so crucial to Pandora that if a prospective cloud app vendor doesn’t have a SAML-connector for its SSO system—which happens about 30 percent of the time—the company will walk away.”

”Identity management SSO is so crucial to Pandora that if a prospective cloud app vendor doesn’t have a SAML-connector for its SSO system—which happens about 30 percent of the time—the company will walk away.” 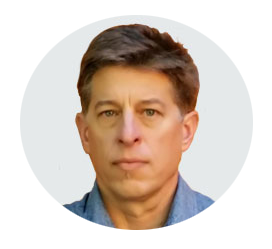 Doug Meier
Director of Security and Compliance at Pandora

Other companies may not require SAML, but without a doubt, they sure would love to have the features SAML provides. One of the top feature requests for HipChat, with 2,768 votes is SAML. Commenters are begging for SSO because the ease would increase app usage by employees, while others reveal they have given up the app after 3 years of an unmet request and have already turned to a competitor.

2. Implementing SSO and MFA on your own is time consuming.

Getting it wrong can be disastrous: just like with any other crucial technology decision, choosing a solution that turns out to be difficult to maintain or doesn’t hold up over time can be a major setback in time and money. So, your focus should be on finding a solution that is hassle-free and long-lasting. Managing federation with a slew of different providers or rolling your own MFA adds a significant amount of technical debt.

For early to mid stage startups, simply rolling out SAML enables organizations using and Identity Management system such as OneLogin, to layer Multi Factor Authentication before authentication happens via SAML, effectively increasing the security of your application, with no work on your part. Add a line like this to your FAQs: “We support multi-factor authentication through our cloud IAM partners,” and call it a day.

3. SAML is hassle-free and long-lasting.

SAML (Security Assertion Markup Language) is EASY because it doesn’t take a lot of time and money to implement—not nearly as much as you probably think it does. SAML is an XML-based, open-standard data format for exchanging authentication and authorization data between parties, in particular, between an identity provider (like us) and a cloud application (like you). It’s true that SAML used to be a huge and complex investment to enable. However, now you can enable SAML in as little as 2 hours. Learn how to enable SAML here..

And SAML is SAFE because it is an industry standard that has been around since 2002 and is used by thousands of applications and all the leading IAM vendors. It isn’t going to disappear any time soon or be replaced by some new flavor-of-the-day that comes along.

By enabling SAML, you’re increasing the value of your app through all the benefits SAML provides: SSO, better usability, speed, and phishing prevention. You can enable SAML on your higher cost plans, such as an enterprise plan, and be reimbursed for the value you added.

Check out this pricing chart for Slack a OneLogin partner: 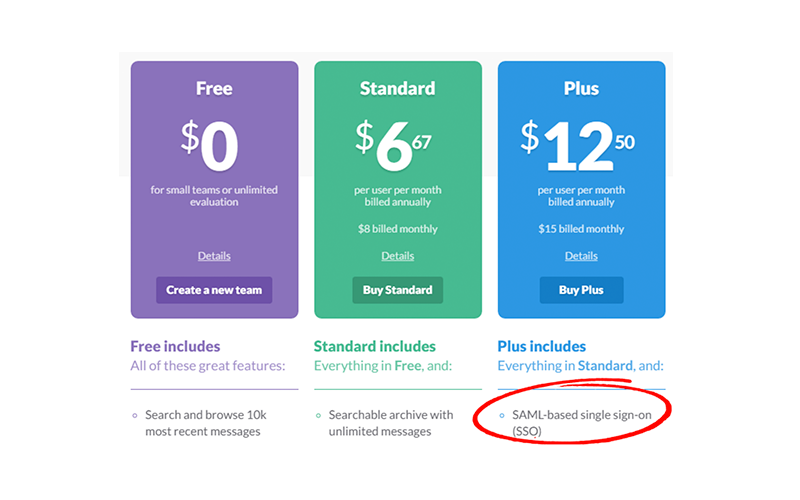 The number one feature Slack blurbs for their Plus plan is SAML (SSO). In talking to cloud app customers, this single feature is often what moved them up the pricing tier of an application and they don’t really mind the extra cost, because the feature has become an imperative.

By using SAML to authenticate an identity instead of passing a username and password, it can decrease your vulnerability to several attacks:

If your application is easy to use and automatically provisioned for employees, the likelihood that they will use it increases significantly. For many applications, the hassle of trying to remember the password or ask a coworker to “add you to the account” slows adoption.

Being an industry-standard not only makes SAML safe, but also improves your credibility—because when you follow the industry standard, you prove to potential customers that you know what you’re doing.

How to Enable SAML

SugarCRM implemented SAML with our toolkit (www.samltool.com) in only 40 minutes! There is no excuse, get started today. 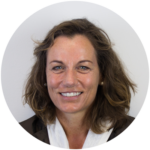 Vera Sparre is a passionate B2B2C marketer with an extensive background in enabling decision makers in High Tech, Mobile and SaaS. Vera has a comprehensive history of empowering businesses through holistic, omni-channel campaigns, and has worked in a number of high level marketing positions at corporations including Microsoft, Charles Schwab, Adobe and multiple SaaS Startups. As the Sr. Director of Demand Generation at OneLogin, Vera focuses on effectively delivering information to targeted audiences, and enabling them to make buying decisions with confidence.

OneLogin as a SAML Service Provider

We have recently released a new feature that enables OneLogin as a SAML Service Provider in addition to being SAML Identity Provider.

Find the best options to choose when creating signing certificates and learn how to renew certificates when they expire.