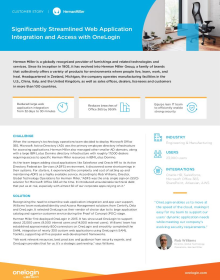 OneLogin enables us to move at the speed of the cloud, making it easy for my team to support our users’ dynamic application needs while meeting our company’s evolving security requirements,

Herman Miller is a globally recognized provider of furnishings and related technologies and services. Since its inception in 1905, it has evolved into Herman Miller Group, a family of brands that collectively offers a variety of products for environments where people live, learn, work, and heal. Headquartered in Zeeland, Michigan, the company operates manufacturing facilities in the U.S., China, Italy, and the United Kingdom, as well as sales offices, dealers, licensees and customers in more than 100 countries.

As the team began adding cloud applications like Salesforce and Oracle HR to its Active Directory Federation Services (ADFS) environment, it discovered some shortcomings in their systems. For starters, it experienced the complexity and cost of setting up and maintaining ADFS as a highly available service. According to Rob Williams, Director, Global Technology Operations for Herman Miller, “ADFS was the only single sign-on (SSO) solution for Microsoft Office 365 at the time. It introduced unsustainable technical debt that put us at risk, especially with almost 50 of our corporate apps relying on it.”

Solution
Recognizing the need to streamline web application integration and app user support, Williams’ team evaluated Identity and Access Management solutions from Centrify, Okta and OneLogin. It selected OneLogin as their vendor of choice due to its large application catalog and superior customer service during the Proof of Concept (POC) stage.

“We want relevant resources, best practices and guidance from security experts, and OneLogin provides that for us. It’s a strategic partnership,” says Williams.

Results
Using OneLogin, Williams’s team has reduced the time to integrate and rollout large applications such as Oracle HR from 32 days to just 30 minutes. This savings is essential as Herman Miller adds employees from acquisitions to its Office 365 environment.

Before OneLogin, it cost Herman Miller roughly half a million dollars to bring the infrastructure of Nemschoff – an acquired company – online and about a month to integrate all its apps. When Herman Miller acquired Design With Reach – who previously used Okta – it was able to migrate the company’s 50 apps (half of which were SAML) in two weeks using OneLogin.

Herman Miller also benefits from stronger security. As Williams explains, OneLogin’s multi-factor authentication (MFA) prevents breaches of Office 365 by 99.9% every single day. “I’m incredibly passionate about the power of OneLogin. As a small IT team that is getting leaner by doing more, we need an easier way to ensure a higher level of security and we get that with OneLogin,” he says.

In addition, Williams’ team is taking advantage of OneLogin Enterprise Sandbox. “It’s priceless to gain an environment that fits our modern model of development, test, and production. We use the Sandbox to test before rolling out dramatic changes, such as requesting employees to use multi-factor authentication. It helps us to deploy new changes with confidence,” he continues.

Going forward, Williams wants every Herman Miller identity to exist in OneLogin as a single source of truth. “OneLogin enables us to move at the speed of the cloud, making it easy for my team to support our users’ dynamic application needs while meeting our company’s evolving security requirements,” Williams concludes.